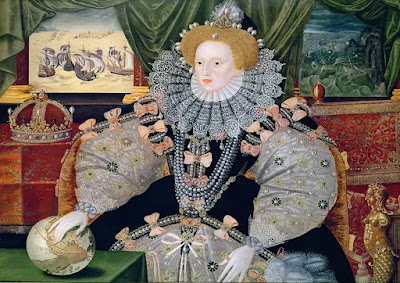 Even at her birth Elizabeth was second in line for the throne and when her father King Henry VIII died three people had to die before she would become queen, but against all odds she did ascend the British throne in 1559. Some say the greatest queen that ever lived.

Queen Elizabeth I was born on the September 7, 1533 in Greenwich England. She was a princess but declared illegitimate through political machinations. She eventually claimed the throne at the age of 25 and held it for 44 years, keeping England powerful through wars, political and religious turmoil. She died in 1603.
She was a truly great woman, hundreds of years ahead of her time. For every minute of whole life she stood proud in a world surrounded by powerful men, reasserting herself, fighting for her life and her supremacy. Imagine the confidence and energy that took. 400 years later, she is still setting a great example for women everywhere. Lead on Elizabeth!
On the morning of the expected invasion of England she dressed in armour and gave the “greatest preserved speech by a woman.’ The text below was found in a letter from Leonel Sharp to The Duke of Buckingham some time after 1624

My loving people
We have been persuaded by some that are careful of our safety, to take heed how we commit our selves to armed multitudes, for fear of treachery; but I assure you I do not desire to live to distrust my faithful and loving people. Let tyrants fear. I have always so behaved myself that, under God, I have placed my chiefest strength and safeguard in the loyal hearts and good-will of my subjects; and therefore I am come amongst you, as you see, at this time, not for my recreation and disport, but being resolved, in the midst and heat of the battle, to live and die amongst you all; to lay down for my God, and for my kingdom, and my people, my honour and my blood, even in the dust.

I know I have the body of a weak, feeble woman; but I have the heart and stomach of a king, and of a king of England too, and think foul scorn that Parma or Spain, or any prince of Europe, should dare to invade the borders of my realm; to which rather than any dishonour shall grow by me, I myself will take up arms, I myself will be your general, judge, and rewarder of every one of your virtues in the field.

I know already, for your forwardness you have deserved rewards and crowns; and We do assure you on a word of a prince, they shall be duly paid. In the mean time, my lieutenant general shall be in my stead, than whom never prince commanded a more noble or worthy subject; not doubting but by your obedience to my general, by your concord in the camp, and your valour in the field, we shall shortly have a famous victory over these enemies of my God, of my kingdom, and of my people.

Come on now, my companions at arms, and fellow soldiers, in the field, now for the Lord, for your Queen, and for the Kingdom. For what are these proud Philistines, that they should revile the host of the living God? I have been your Prince in peace, so will I be in war; neither will I bid you go and fight, but come and let us fight the battle of the Lord. The enemy perhaps may challenge my sex for that I am a woman, so may I likewise charge their mould for that they are but men, whose breath is in their nostrils, and if God do not charge England with the sins of England, little do I fear their force… Si deus nobiscum quis contra nos? (if God is with us, who can be against us?) 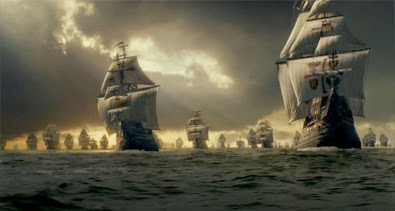 In Elizabetha Triumphans, published in 1588, James Aske provides a version of the speech, reworked in verse:


Their loyal hearts to us their lawful Queen.
For sure we are that none beneath the heavens
Have readier subjects to defend their right:
Which happiness we count to us as chief.
And though of love their duties crave no less
Yet say to them that we in like regard
And estimate of this their dearest zeal
(In time of need shall ever call them forth
To dare in field their fierce and cruel foes)
Will be ourself their noted General
Ne dear at all to us shall be our life,
Ne palaces or Castles huge of stone
Shall hold as then our presence from their view:
But in the midst and very heart of them
Bellona-like we mean as them to march;
On common lot of gain or loss to both
They well shall see we recke shall then betide.
And as for honour with most large rewards,
Let them not care they common there shall be:
The meanest man who shall deserve a might,
A mountain shall for his desart receive.
And this our speech and this our solemn vow
In fervent love to those our subjects dear,
Say, seargeant-major, tell them from our self,
On kingly faith we will perform it there…
A great collection to hang on the wall to remind every female of the power they hold within.